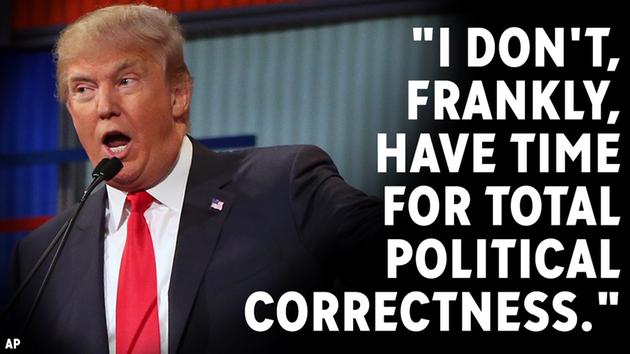 It is almost impossible to ignore the controversial battle between being politically correct and expressing freedom of speech.On one side of the argument there is a significant group of people who strongly believe in equality for all and practice the appropriate vocabulary to support this. This includes having the correct terms for ethnicities, gender, sexual preference, religious status, disabilities and political movements (just to name a few).On the other side of this discussion many feel that our society is becoming overly-sensitive, taking jokes too seriously and censoring our freedom of expression.

According to the Oxford Dictionary politically correct is defined as: A term that is used to describe language, policies, or measures which are intended not to offend or disadvantage any particular group of people in society.

Being politically also recognizes our history, which is embarrassingly racist, homophobic, sexist and generally prejudice towards any minority. That is not to say these problems don’t currently exist, they certainly do but we are finally practicing equality more than even before in our society and I’ll be damned if that is somehow a problem

A recent article in the Guardian quite astutely expresses that black-face at Halloween parties and sexist jokes were much more tolerated pre social media. However, racism and casual misogyny were just as corrosive to black and lack and female humanity in 1998 as they are in 2016; sensitivity hasn’t changed –access has. “The punch lines are punching back. But it’s much easier to ignore your complicity in oppressive systems if you can cast the people who have been legitimately harmed as oversensitive” (Lindy West, The Guardian ,2015) .

This past week a radio host from Winnipeg, MB was finally told his misogynist and racist videos,were not acceptable and repercussions need to be made. This was met with a huge backlash from the majority of people involved in the argument indicating that the others are taking it “too seriously” and they “can’t take a joke”. So, lets pretend for a moment these videos were actually funny and clever. If that was the case the punch line in these particular videos is towards the extreme racial divide and deeply rooted poverty issues that exist within city (where I happened to grow up). Neither of these issues are funny and most people would agree with that if they really thought about it. This host also felt the need to further argue his stance by explaining, “Winnipeg doesn’t really have a racism problem”.

Donald Trump makes countless misogynistic statements about women that are fairly tolerated, as he is just “being funny”. If his jokes were funny the punch line is within the dangerous misogyny and sexism that is vibrant all throughout our world which is in no way funny. Although Trump has various ridiculous quotes to choose from, I believe that “The biggest issue that faces America is that we are too politically correct” (Washington Post, 2016) takes the cake.

Trump is saying that the biggest issue that faces the country is not:national security, terrorism, the economy, gun control, unemployment, ethics or crime-all of these issues, (to the potential next president of America) are less important than people’s ability to swallow sexist jokes. Again, most of us can agree there is a fundamental flaw in this logic when we really think about.

Then there are the countless rape jokes, most notably of comedian Daniel Tosh who feels it’s more important to make jokes towards rape than be silenced. He thinks that it would be horribly “unfair” to him…as a white male (just saying). He even took the liberty to respond to a female heckler saying “rape jokes aren’t funny” with “wouldn’t it be funny if she got raped by like five guys right now” again, so not funny. It’s not like we don’t get the joke, we get it and we don’t like it and that’s our freedom. These are just recent examples, and barely scratch the surface of a much larger issue.

According to the Oxford Dictionary freedom of speech is defined as: The concept of the inherent human right to voice one’s opinion publicly without fear of censorship and punishment.

That being said, some of the opinions of people who really feel the need to fight for freedom of speech are concerned that if we are too censored we will not be dealing with issues, we are just pretending they’re not there. This is a completely  worthy argument, however it’s not really the case. The reality is that we now have more knowledge and tools in our culture, vocabulary and media to be less ignorant and hurtful to marginalized people and minorities that are, all too often, misunderstood. Additionally, in what workplace can we really say anything we want without repercussions? Freedom of speech exists in our social culture but not in our professional. Is it really so important that we have the “freedom” to make lazy offensive jokes and keep words like “retard” in our vocabulary? Is it really worth fighting for the freedom so say hurtful statements that attacks people we don’t understand the experience of just so we get a few laughs at a BBQ? White privilege, which I recognize I have, is real and we haven’t struggled as much as any other group in Western society. So maybe, just maybe, we can handle exchanging a few well-chosen words in our generous and widely articulated language.

If the concern is really geared at not having interesting and important discussions about prejudice, I guarantee you people with intention to be politically correct would be happy to have these conversations with you. If your vision of a politically correct person is a non-inclusive, judgmental and radical feminist with an I hate men shirt logo, just remember there are extremists in any social movement just like fascists on the other end of this argument. The opposite of political correctness is not freedom of speech, not recognizing privilege is.