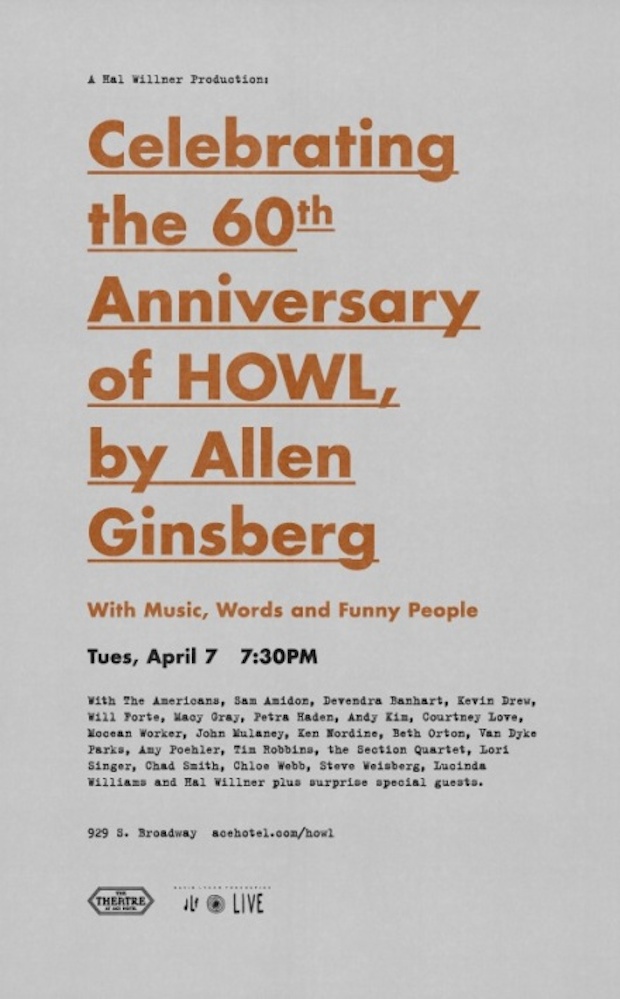 What do Courtney Love, Devendra Banhart and Lucinda Williams have in common? Seemingly, not a whole lot, except that they will all be performing at the 60th Anniversary of Allen Ginsberg’s Howl. Yes, this is a wonderful mash up of eclectic people, but it gets even better, all the proceeds are going to the David Lynch’s Foundation of Transcendental Meditation. Yes, the specific brand of esotericism happening here is thrilling but there’s more…Kevin Drew, Amy Poehler and Tim Robbins will be speaking, along with many other’s including a promising special guest who at this point could very well be a Tupac or a Unicorn.

This event becomes even juicier once it is fully decompressed so please allow me to squeeze this lemon. Allen Ginsberg’s poem Howl is considered to be one of the most controversial pieces of literature of all time.The poem was written in 1955, which was subsequently banned upon its release cross culturally and taken to court in an “obscenity trial.” Shortly after the poem was released Lawrence Ferlinghetti was arrested for publishing Howl as was Shig Murao for carrying the poem at his bookstore in San Francisco. Eventually, freedom of speech and progression amongst literature dominated this tense time and Howl became one of the most significant poems in history. It has been wildly published, heavily analyzed and questionably interpreted (revert to James Franco).

The headliners for this event are by no means strangers to controversy and irritating media redouble. The David Lynch Foundation is a global charitable organization that is focused on assisting people dealing with difficulties through Transcendental Mediation (TM). The groundbreaking director speaks of his life being transformed by TM and has practiced it since 1973. The foundation is aimed specifically towards youth at risk, victims of abuse, prisoners, African war refugees and the homeless.

Everyone involved for this enticing event is in some way;innovative, brave and at times misunderstood-much like the poem itself (despite some of Ms. Love’s decisions).This benefit initially may seem like a sporadic medley of unparalleled people, however I can’t think of a better group, for a better anniversary, for a better cause. This luring soiree takes place at the Ace Hotel in Los Angeles on April 7.